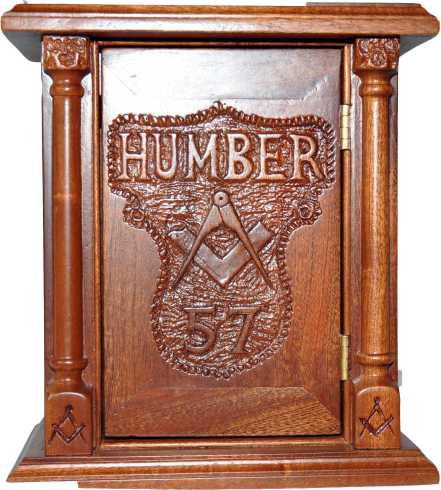 The idea of a Travelling Gavel is not new, but what a lovely and inspiring way to encourage Masons across the Province to visit one another, not only to witness how other Lodges perform their ritual, meet new friends and renew old acquaintances and enjoy the Festive Board, but also to mount a devious and well thought-out rescue plan on a new treasure – the Travelling Gavel.

So here is a good reason to get out and about, from one end of the Province to the other. Unlike the Travelling Gavel in a neighbouring Province, which only travels in a very small area, ours can travel much further – it even has its own Passport.

Good luck in your rescue attempts but please read and abide by the Rules. 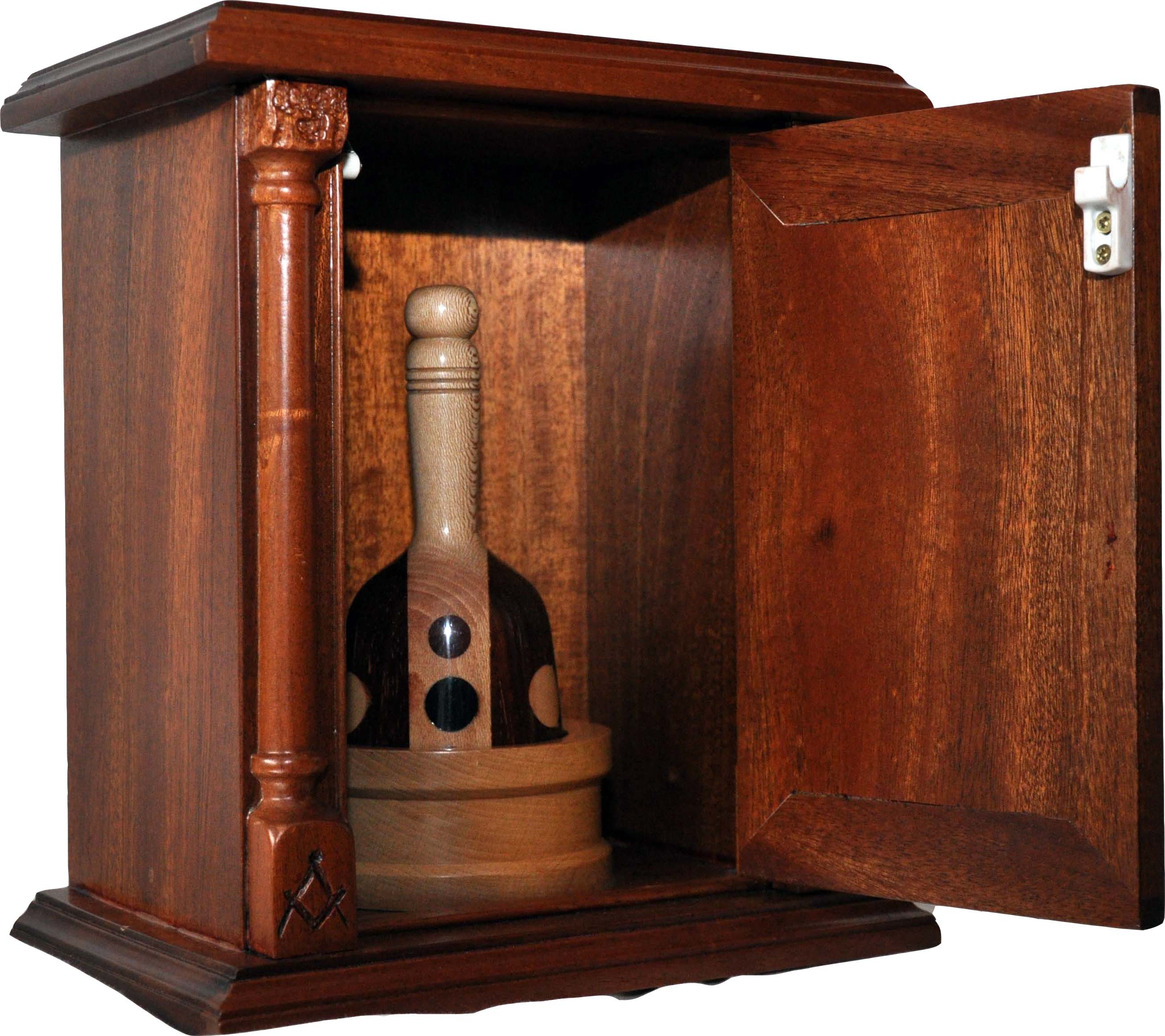 The idea was conceived by W Bro Fisher; the Gavel was presented to the Humber Lodge 57 by W Bro Coates,  and the accompanying box was made and presented by Master Carpenter W Bro Wiles.

The gavel's journey over the Province during the first ten years are archived in the sub-menu below. Grateful thanks are extended to W Bro Fisher who instigated the initiative and has eloquently recorded the progress of this Masonic artifact from the premiere Lodge in the Province.

Current entries appear on this page, with the most recent at the top.

The Humber Lodge invites Sister Lodges in the Province to put together teams to claim the Travelling Gavel. 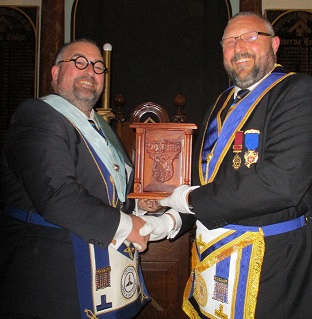 The Juno Lodge 10001 seized the gavel three days ago in a raid on the Ridings Tablers' Lodge 9586 (see the article below.) However, it did not keep it long. Eager to bring it back to Beverley, the Ridings Tablers and Brethren of the Constitutional Lodge visited Juno at Dagger Lane, claiming six Brethren in each Lodge. However, the Phoenix Lodge 9963 trumped the Beverlonian gangs with seven Brethren and demanded the multihued maul in its carved case.

Thus the TG is (for now) the property of a Beer-loving Lodge in Hull's Old Town. The next Phoenix Lodge will be at the Sailmakers' Arms on Tuesday 20th September.

For notes on the Juno meeting, see the Blog page. 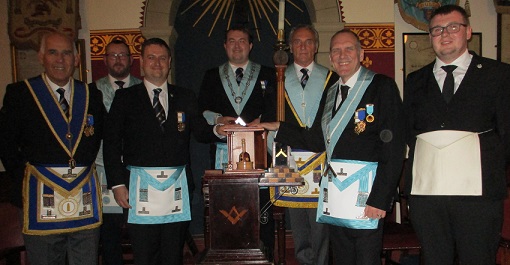 The Ridings Tablers' Lodge 9586, youngest Lodge in the Beverley Freemasons had hardly had time to get used to having the gavel when it was wrested from their hands by Juno Lodge 1001, youngest Lodge in Hull at the June meeting. So it returns to Dagger Lane. But one must applaud the Brethren from the University Lodge for making the effort - from the Grand Lodge Officer to the new Entered Apprentice. The claim was made at the meeting itself, and the gavel passed over at the Festive Board. Not all the Juno delegation are pictured - W Bro Paul Harper PJGW (Juno Orator) and W Bro Barrie Jeffries (Juno ADC) were tidying away the presentation screen used in the Lodge business at the time this snap was taken.

Where will it travel next?

For notes on the Lodge meeting, see this date on the Blog Page.

Well done to the Ridings Tablers' Lodge 9586 who attended the very successful installation of Bro Aaron Sutherland at the de la Pole Lodge 1605 and claimed the Travelling Gavel. It now languishes in Beverley - who will claim it next? For an account of the meeting, see this date on the Blog Page.

The Gavel remained in York during the covid crisis, but returned to Hull in October 2001 (see below) intil now, when it is starting again to move further afield.

Other Lodges in the Province of YN&ER are challenged to try to claim the TG - the rules are attached to this page. 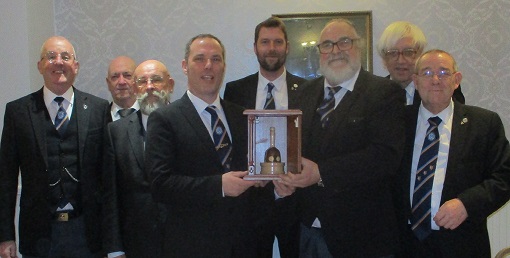 W Bro Ben Kelly, WM of the de la Pole Lodge 1605 gathered a team of officers to rescue the the Travelling Gavel from the clutches of Minerva Lodge 250 and succesfully wrested it from thence to return it to Beverley Road. W Bro Kelly, who responded for the visitors, complimented the Minerva Brethren on their ritual - Bro John Robertson has been successfully passed to the Second Degree - but still forthrightly demanded the Gavel as the de la Pole Brethren had gathered in sufficient numbers according to the rules. 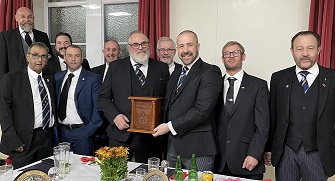 The Worshipful Master of Minerva Lodge 250, W Bro Kevin Marshall, brought along a posse of his Brethren to claim the gavel from Technical Lodge 5666. Looking at the formidable team, especially Danny Betts cracking his knuckles threateningly, nobody from the Beverley Road Lodge was inclined to dispute the claim, so the gavel returns to Dagger Lane - at least until the next claimant makes a successful bid.

Never mind, Technical Lodge, you held it for a month! See the Blog page for this date. 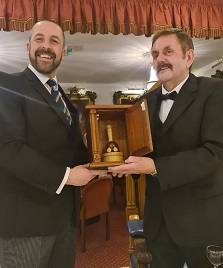 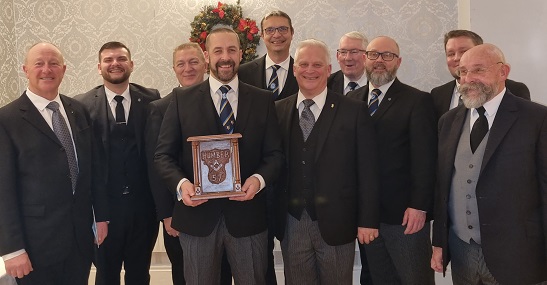 Travelling Gavel and as their numbers outweighed the other visitors, their Worshipful Master, Rob Atkinson was pleased to receive it. It is good that this beautifully turned maul in its hand-made case is still in the Hull area where it originated - but any Lodge in the Province may make a claim for it - providing they qualify, of course. Well done, Technical Lodge!

On the occassion of W Bro Eddie Wildman representing the RWPGM at the Invictus Lodge 9960 in York another half-dozen Humber members elected to support him and to demand the return of the Travelling Gavel which had languished in lock-down during the pandemic. The Humber visitors easily outnumbered those of other Lodges, and the powerful claim made by the JW, Bro Alexander, would have struck fear in the hearts of other Lodges, but the Invictus Lodge, a young military based Lodge were initially inclined to deny the request. Reason prevailed, however, and the passing over of the Gavel in its custom-built box was executed with good humour and applause. Many thanks to the Invictus Lodge for looking after the Gavel during the interim - and many thanks to the WM, W Bro Sean Carroll, under whose able leadership a good time was enjoyed by all both at the double initiation ceremony and at the Festive Board.