The following have appeared on the dining table at the occasional festive board.

Commonly known as the Spider Plant as its offshoots sprout small replica plants that look like elegant green spiders, Chlorophytum Variegatum does not feature in the annals of Freemasonry.

However, it is masonic in nature not only with its handsome leafy arches and constant inclination to the light, but in its unassuming usefulness to mankind, for it absorbs carbon dioxide and produces oxygen for us to breathe.

It needs little attention – just an occasional drink of water.

Challenge: How many plant references can you find in the first three degrees of Freemasonry?

Most (though not all) Lodge Deacons carry the symbol of a dove, which bears in its beak an olive branch.

The Corinthian column capital is decorated with acanthus leaves and scrolls – there is a story that the inspiration for the design came from an old wicker basket with a fern growing through the wickerwork.
In the NEC (and in the answers to the questions) the Candidate is told that FM’s branches are spreading over the whole habitable globe.
The PW to the 2° indicates an ear (or sheaf) of corn near to a fall of water, mentioned also in the tracing board along with more architectural decorations, network, lily-work and pomegranates. The lily-work probably depicted the water lily Nyniphaca lotus; it has been suggested that King Solomon’s Temple incorporated Egyptian designs, and the lotus and pomegranate Punica granatlim featured therein.
The ES’s weekly allowance of corn, wine and oil (all derived from plants is also noted in the tracing board ritual.
The apron rosettes possibly do not merit mention, but the sprig of acacia features in the third degree and can be seen on the tracing board. The ark of the covenant which is depicted on the UGLE coat of arms and minutely on the Grand Lodge Certificate, was built of acacia wood.
Also in the Sprig of Acacia ritual, mention is made of the beautiful Rose of Sharon and the Lily of the Valley. The former appears in different varieties but it is possibly the Hibiscus Syriacus Red Heart to which the passage refers. The latter, Convallaria majalis is delicately fragrant with white blooms.
Some Lodges use a quotation from the Book of Ecclesiastes in the 3°, where the flourishing almond tree is an allusion to the white hair of old age.

Thus there are between ten and thirteen references to plants in the first three degrees (or fourteen if your Lodge makes reference to the transporting of logs for the building of the Temple at Jerusalem). Give yourself a gold star if you managed to score double figures.

The word candelabra was first seen in print in 1805, but candle holders of various kinds date back to 400BC. The candelabra and the two candelabrums gracing the Humber Lodge Festive Board tables are executed in the English Georgianase style, each standing on an oval, barge shaped foot, with detachable bobèches (the collars on the sockets to catch melted wax.) They have been lovingly polished by Worshipful Masters since they were presented to the Humber Lodge in 1965 by W Bro Benjamin E Thompson, WM; Bro Frederick Weeks, SW; and W Bro C R G Simmons, PGStwd, JW: the names may be seen on the bases.

They have suffered over the years; one bobèche has disappeared and an enterprising Brother has carefully made a replacement: the copper pipe he used as the candle holder is evident, but correct, for the originals are mere plate over copper bases. Indeed, constant polishing has worn away the plate in places and the copper shows through. The candelabra has been twisted out of true on some occasion, so that the arms are no longer symmetrically poised above the base, and it is likely any attempt to repair this would further damage the main stem-piece.

But, like many of the Brethren where age has made its mark, the candlesticks continue to function, illuminating the Festive Board whilst figuratively lighting the way from the past into the future. In material terms they are not valuable – they wouldn’t fetch much on eBay. As part of our history, they are much appreciated.

The Masonic gavel is an emblem of authority used by the Master of the Lodge (and echoed by his Wardens) to punctuate his actions and symbolise his executive power.

The gavel (or mallet) is one of the Working Tools of the Entered Apprentice.

What does a true gavel look like? Unlike the Mallet, which is essentially barrel-shaped, the gavel’s head

is flat on one end and pinched or pointed at the other, so that whichever end is used, the blow can be generally distributed or concentrated at one point.

Gavels may be made from hardwoods like acacia, cherry, mahogany, oak, teak, maple, hickory or walnut.

The Humber Lodge Festive Board Mallets were presented to the Lodge by W Bro Eric Howarth PPJGD of the Province of East Lancashire, on the occasion of his nephew Bro Ian Syddall being raised to the sublime degree of a Master Mason on Tuesday 12th June 2007. They are made from the pews of the Old Unitarian Church in Bank Street, Bury, Lancashire, which relocated in 1974 near to the Bury Masonic Hall. The old church was demolished three years earlier to make way for new retail units.

The wood of these particular mallets has yet to be identified; can anyone say of what type of wood they are made?

I discovered the following poem in a book by the Masonic author Arthur Ward, Masonic Symbolism and the Mystic Way first published in 1913. In addition to short essays reflecting on aspects of the three degrees in the Craft and the search for wisdom therein, Ward has included several sonnets of somewhat uneven quality. However, Free and Accepted continues the theme of the Mason building a spiritual temple: as an Apprentice he learns to square his life and actions, practising cutting the stones to fit truly; as a Fellow Craftsman he establishes the necessary foundations by good deeds and a peaceful mind; as a Master Mason he looks to heaven to bless the structure he has raised (the word “fane” means “temple” from the Latin fanum) recognising that inner beauty comes through dedicating oneself selflessly to life. The concluding couplet tells us that all three elements are essential for us to become Living Stones, fit for the Grand Lodge Above.

The Apprentice cuts the stones of action square, 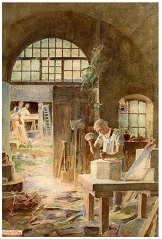 By patient labour setting them to truth,

The bedrock deep on which his temple fair

Foundations of strong peace, and walls of deeds

The dome of wisdom meet for all men’s needs.

The Master Architect calls down from heaven

Creative fire that pours throughout the fane

Essential beauty to the lover given,

Who sacrifices all and seeks no gain.

Three men in one they stand, beyond all strife,

Building the temple of immortal life.

The Office of Steward 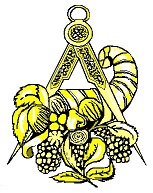 Generally speaking, the first office held by a Brother is that of Steward. His duties include providing refreshment after a Masonic meeting, which nowadays involves serving at the tables. In the past, at Dagger Lane and other venues, the Stewards would eat in a separate room, having served the Brethren at the Festive Board. As most of them were newly made Brethren, they seized the opportunity of interacting with their peers and asking questions about Freemasonry from the more experienced Stewards, using this more informal opportunity to learn about the Craft and the people in it. The bar was staffed by Stewards. Health and safety regulations have made this impossible nowadays, so the Stewards eat with the rest of the Brethren, though it is expected that they assist in dishing out the food and taking the plates away.

The Steward’s emblem is a cornucopia. The word derives from the Latin cornu, meaning horn, (as in Ice-cream cornet) and

copiae, meaning plenty (as in “copious”.) So a cornucopia is a horn of plenty.  It is illustrated as a curved, hollow goat’s horn, or horn-shaped basket, always overflowing with fruit and vegetables, corn, grapes, etc.

The god Zeus, according to one legend, was fed from the broken-off horn of the goat Amalthaea, his foster mother. She filled the horn with fruits and flowers and presented it to the child-god. This emblem of abundance is a traditional symbol in architecture, art and decoration.