What is Royal Arch Masonry?

There is an indissoluble link between Craft Freemasonry and the Royal Arch. Together they constitute ‘pure Antient Masonry’, which consists of 'three degrees and no more, the Entered Apprentice, the Fellow Craft and the Master Mason, including the Supreme Order of the Holy Royal Arch'. It is the completion of Craft Masonry. 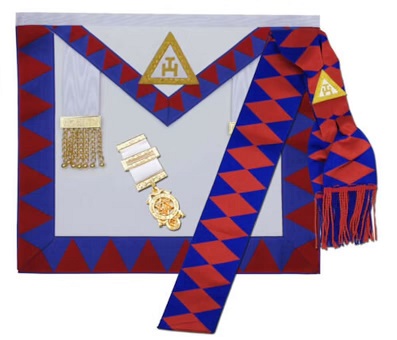 The fees are typically considerably less than for Lodges. A Chapter is normally attached to a Lodge and members are called Companions.

The regalia is different to that worn in a Craft Lodge. It consists of an Apron with red and blue surround, a red and blue sash and a special Jewel which Royal Arch Masons should also wear in their Craft Lodges in order to show the bond that exists between Craft and Royal Arch.

As in all Masonic degrees, the ritual of the Royal Arch is an allegory. It helps to focus the minds of the Companions, without conflicting with their religious beliefs, to a contemplation of the nature of, and their relationship with their God which will be appropriate to their own religion.

A Royal Arch Chapter has a number of officers with particular titles but most important are the three Principals who collectively rule the Chapter for one year. Each year there is an Installation meeting for the new team of officers.
In England, the Royal Arch has four ceremonies: the exaltation ceremony to bring in new members and an installation ceremony for each of the three Principals. The exaltation ceremony is in two parts: a rather dramatic presentation of the principles of the Order followed by three Lectures in which the history, symbolism and principles of the Royal Arch are further explained.

If you are interested in joining a Royal Arch Chapter you should first speak to your Lodge Royal Arch Chapter Representative (W Bro Ian Syddall in Humber Lodge 57) or your Lodge Secretary. While some Brethren elect to stay with the Chapter attached to their particular Lodge, this is not mandatory, and other Brethren decide to join a Chapter at a different venue, and enlarge their circle of friends by meeting new Companions.

Like Craft Freemasonry, the Royal Arch is open to men of all faiths.